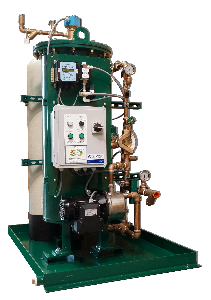 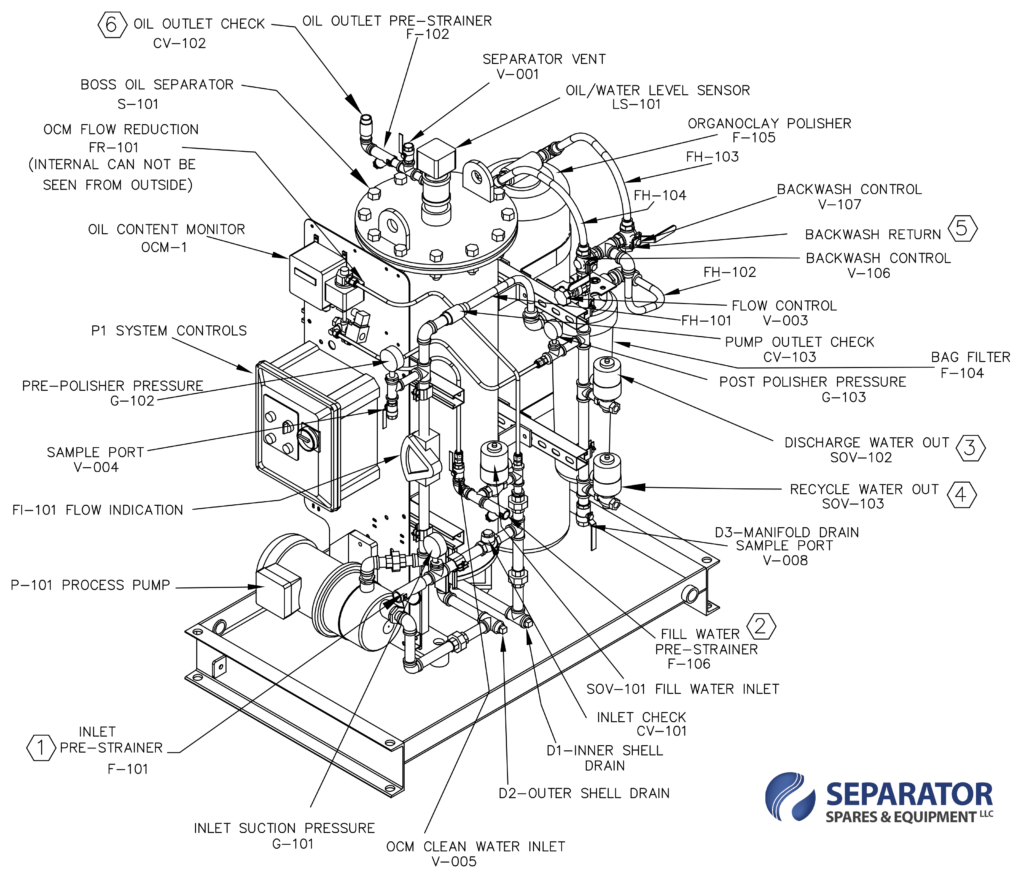 The BOSS oily water separators are designed and certified to remove oils, grease, and other hydrocarbons from water in accordance with IMO standards as defined in MEPC 107 (49). Additional features are available to meet specific situations or to help improve the performance of the system to exceed MEPC standards. Water quality is monitored with a certified oil content monitor.

The system you have may or may not have some of the following components depending on how the system was originally ordered or modified since the system was installed. The BOSS system, if operated properly, will meet and exceed all the requirements of MEPC 107 (49). 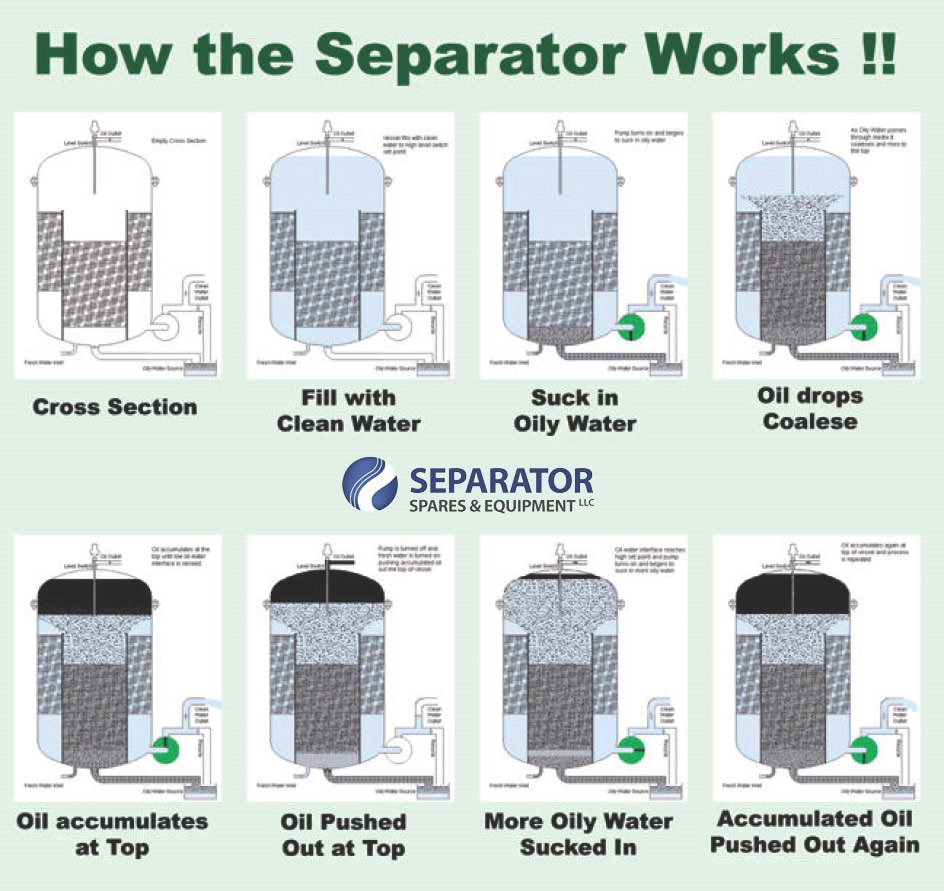 The system is first filled with clean water. A centrifugal pump (P-101) pulls oily water from a sump, bilge, or holding tank into the bottom center section of the coalescing separator (S-101) through a pre-filter Y strainer (F-101). The separator has an inner and outer section. As the oily water enters the inner center section, its velocity slows down and it rises up through the center section of the separator. As it rises up it passes through an oleophilic media (polypropylene). The media facilitates the separation of the oil from the water by providing a surface area that attracts droplets of oil and holds them until they coalesce into larger droplets which then rise to the surface of the water in the separator.

The water then spills over the inner weir and flows down through another layer of media to the bottom of the separator. Passing through the second stage of coalescing media further removes residual oil droplets which rise to the top of the separator. Separated water exits the separator out the bottom of the outer section, through the pump (P-101), then is pumped under pressure through the flow meter (FI-101), the post separator bag filter (F-104), the post-filter media, and finally the flow control valve (V-003). The polisher is equipped with manual backwash valves (V-106 & V-107) to remove accumulated fines from the polisher media. The backwash discharge is normally directed back to the bilge or holding tank.

A conductance level sensor (LS-101) located at the top of the separator detects the water/oil level in the separator. When the water is displaced by the collected oil-air-gas to a predetermined low water/oil interface level the system switches from normal separating called “PUMP & WATER DISCHARGE” mode to “FILL & OIL DISCHARGE” mode (see the lights on the panel. The pump (P-101) turns off, the discharge valve (SV-102 and or the recycle valve (SV-103) close, the water makeup valve (SV-101) and oil discharge motor operated ball valve (MOV-101, if equipped) open. Makeup water is allowed in, pressurizing the separator and raising the level of the water. The oil-air-gas is pushed out of the separator through the oil out valve. Once the water reaches the high level, the level sensor switch shuts the makeup water and oil out valves. Normal “PUMP &
WATER DISCHARGE” mode resumes.

The operation of the discharge and recycle valves is directly controlled by the oil content monitor (OCM). Various models and types of OCM units are available. If the water flow at the discharge valve has an oil content of less than 15ppm on a standard system (5ppm on some units) the water is allowed to be discharged overboard or to another appropriate collection receptacle or drainage. If it is greater than the preset oil
content ppm level, it is directed through the recycle valve back to the oily water source.

The BOSS 107 oily water separators include an oil content monitor (OCM) that has been certified to meet the MEPC 107(49) regulations. It is sometimes called a Total Petroleum Hydrocarbon (TPH) monitor or bilge alarm.

The OCM monitor has the ability to automatically return non-conforming discharge water back to the sump or bilge. The recycle solenoid valve (SV-103) and the oil in water monitor (OCM) control the recycle action. The OCM unit is a 15 PPM oil content alarm monitor that has been tested and approved in accordance with IMO Resolution MEPC.107 (49). The OCM monitor is continually sampling the process stream and detecting the amount of oil concentration. It is designed to react quickly to any changes in the oil content.

The BOSS oily water separator can be ordered with any 107(49) certified monitor. The standard OCM comes with a 15 ppm limit. The OCM allows the limit to be set in a range from 1 ppm to 15 ppm, but cannot be set above 15 ppm. In some cases there is a requirement for 5 ppm discharge. If this is the case it can be handled by either setting the standard OCM to 5 ppm or by ordering a special 5 ppm version of the OCM that cannot be set above 5 ppm. 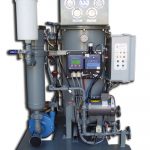 Oily Water Separators
As regulations become more stringent and enforcement increases, everyone, including owners, designers, builders and operators of ships are becoming aware… 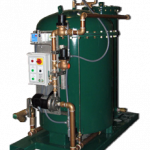 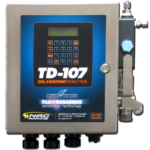 Our facility is open for business, but with limited internet. Power and running water are restored.

You have Successfully Subscribed!